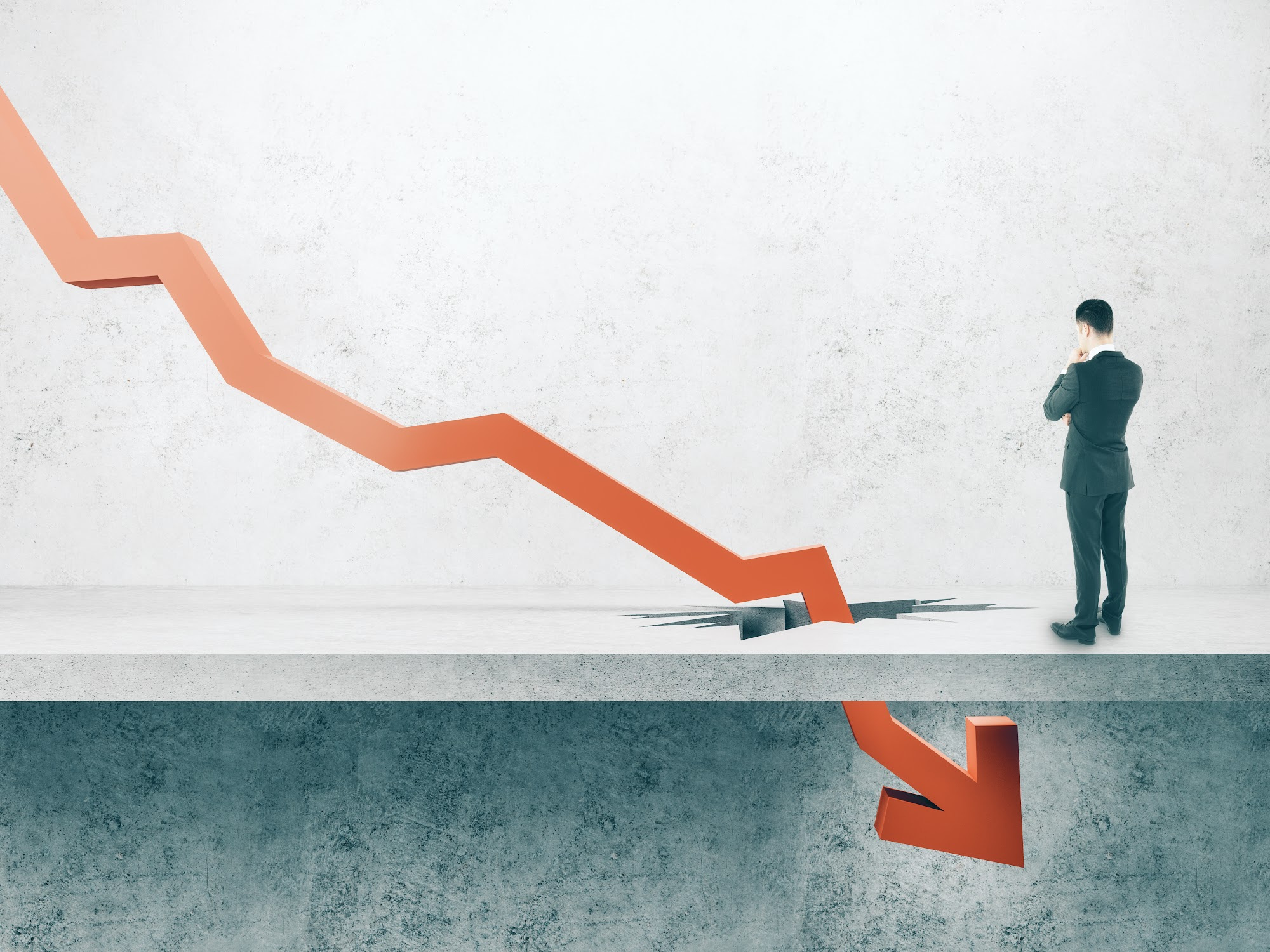 We have many subscription options.

Contact our Sales Team to discuss your equity research needs.

Time to Pay Up the Bezzle;
Bonds or Real Estate? Investomania

This is an issue of our weekly newsletter that we send to our clients in which we highlight our research, news and market events of the week.

This week we stumbled across probably the best word to describe the current markets.

It started with this column from James Mackintosh at the Wall Street Journal: Where to Look for the Next Wall Street Blowup. As you know, we're all about avoiding blowups at Veritas, so the headline drew us in. It's a great column, but this line got us curious:

Long before Mr. Buffett discussed naked swimmers, economist John Kenneth Galbraith invented the "bezzle" - fraudulent losses accumulated in the good times that are only discovered when the economy weakens. After a decade-long bull market with only the briefest of interruptions in 2020, there could be plenty of bezzles yet to emerge.

What on earth is a bezzle?

Here is more from Galbraith:

In good times, people are relaxed, trusting, and money is plentiful. But even though money is plentiful, there are always many people who need more. Under these circumstances, the rate of embezzlement grows, the rate of discovery falls off, and the bezzle increases rapidly. In depression, all this is reversed. Money is watched with a narrow, suspicious eye. The man who handles it is assumed to be dishonest until he proves himself otherwise. Audits are penetrating and meticulous. Commercial morality is enormously improved. The bezzle shrinks.

The more you think about it, the better the word gets. It also seems very underused. The most "bezzle" has ever been searched on Google in a week was about 100 times - globally - over the past five years, according to Google Trends.

This is an excellent article written about it last year by Michael Pettis, a Nonresident Senior Fellow at the Carnegie Endowment for International Peace: Why the Bezzle Matters to the Economy.

He does a great job of explaining how the word has evolved. Here is part of his essay:

As British economist John Kay later explained, "The joy of the bezzle is that two people - each ignorant of the other's existence and role - can enjoy the same wealth." In this sense, the bezzle is created not just by Ponzi schemers, like Madoff, but also in the form of companies—like Enron, for example, or WorldCom—whose accounting frauds result in overvalued assets and excessively high stock valuations. Until the accounting frauds are uncovered, there is a collective increase in psychic wealth as the value of the bezzle rises.

Unfortunately, the bezzle is temporary, Galbraith goes on to observe, and at some point, investors realize that they have been conned and thus are less wealthy than they had assumed. When this happens, perceived wealth decreases until it once again approximates real wealth. The effect of the bezzle, then, is to push total recorded wealth up temporarily before knocking it down to or below its original level. The bezzle collectively feels great at first and can set off higher-than-usual spending until reality sets in, after which it feels terrible and can cause spending to crash.

Pettis writes about various forms of bezzles, from fraud (Madoff) to asset bubbles (Japanese real estate in the 1980s) to over-investment in infrastructure that isn't justified by economic value creation (he thinks as much as half of the growth in GDP in China in recent years may be a creation of bezzle) to inflated currency values to overpriced collectibles.

The bezzle also appears to be systematic and self-reinforcing, in both directions.

When it is being created, the illusion of wealth tends to reinforce growth and encourage the creation of more bezzle. When it is being amortized, it tends to inflict additional costs of financial distress on the economy, especially to the extent that it was financed by debt.

So here we are. After all the free government money and splurges on zero-percent debt, we have had meme stocks, SPACs, NFTs, cryptocurrencies, Cathie Wood (this is quite a read: The Rise and Fall of Wall Street’s Most Controversial Investor), all the Pelotons of the market (Peloton is building a factory in Luckey, Ohio, that it will never occupy) and "bat-shit crazy" Canadian house prices (Ron Butler's words, not ours, last fall during our housing conference).

What makes bezzle such a great word is it is much more economic-based than 'bubble', which sounds so innocent, blameless and childlike. "Oh dear, the bubble popped!"

Bezzle has an edge to it. It's an entry on a ledger that must be paid when the bill comes due.

So how much bezzle do we have to work off? No doubt, it's in the trillions. Someday an economist will add it all up. Crypto losses alone already add up to US$1 trillion (and people are still piling in).

Meantime, here are a couple of ideas of how much bezzle we might have close to home in Canadian real estate.

We know that residential investment (new construction, renovations and transfer costs) was 10% of Canada's GDP in 2021, up from 7% before the pandemic or double the U.S. And here is a tweet this week from Steve Saretsky, who you'll also remember from our housing conference (yes, we're planning our next one for October). 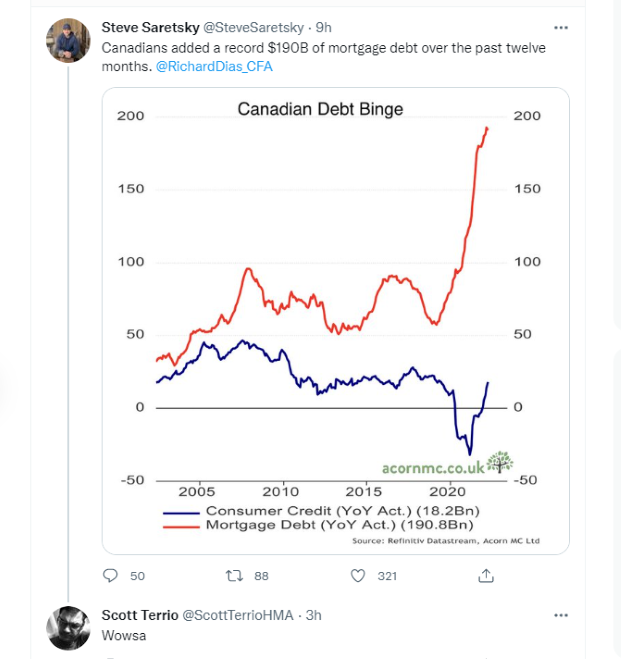 Whither the Real Estate Investor

If real estate investors accounted for one in five purchases over the past several years (probably more last year), then we wonder what will happen to bids if these buyers exit the market.

As Anthony told us this week, investors can do better buying boring government bonds than real estate in the GTA these days, as for the first time in years, the rental yield is lower than the five-year bond.

Watch the replay: GTA Real Estate: Can You Make Money? - With Anthony Scilipoti (3-minute video/clients only). 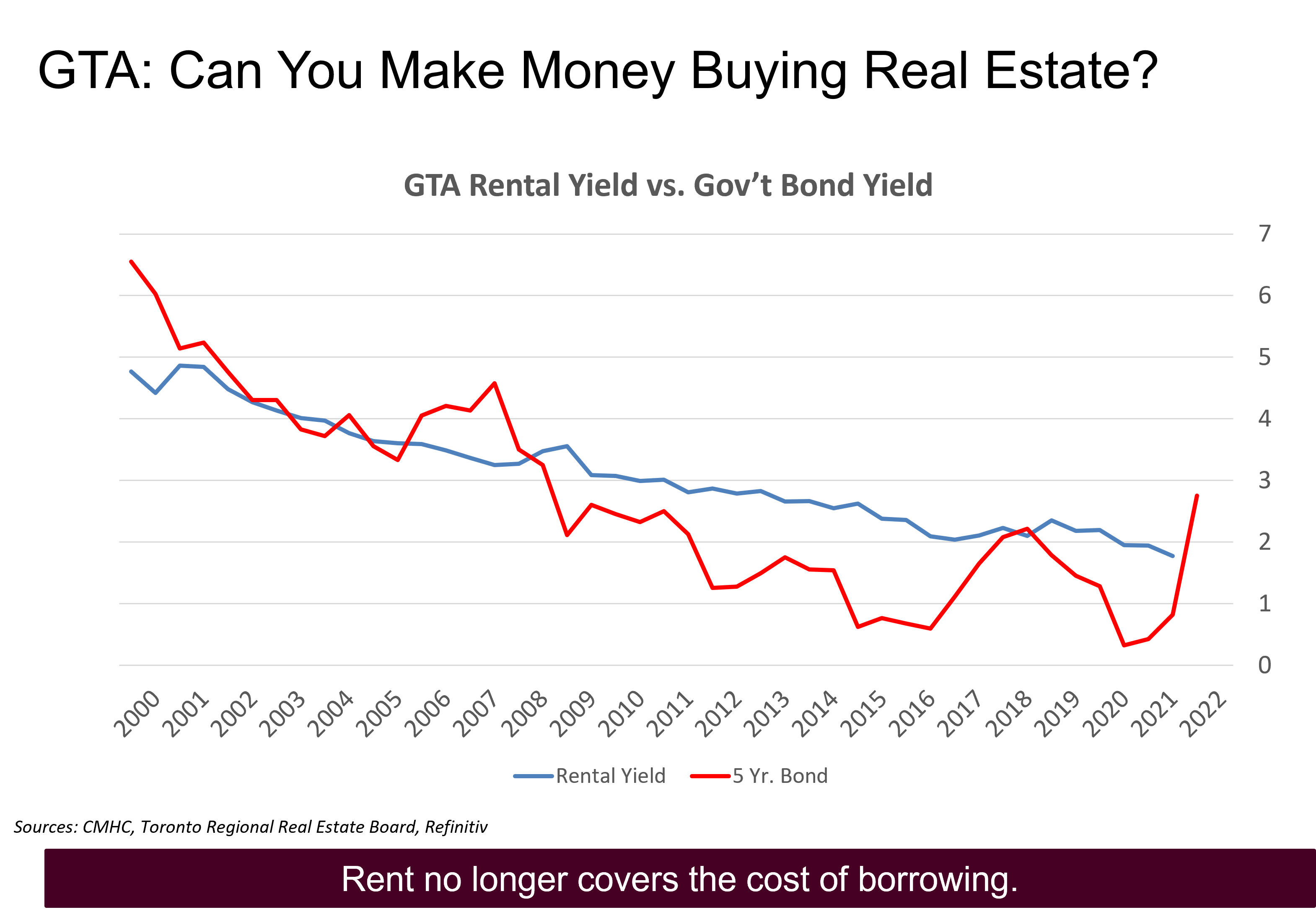 The audit reform news out of the U.K. is far-reaching, as it tries to deal with scandals like Carillion in 2018 and the BHS failure in 2016. For instance, "Directors at the biggest companies who breach their legal duties to be open with auditors, or lie about the state of their firm’s finances, will face sanctions, such as fines, and the government will act to address ‘rewards for failure’ – where bosses pocket bonuses despite their company collapsing."

Certainly, some of the reforms are much needed and will help investors, but inevitably, they'll go too far (MiFID II).

Investomania: What fresh hell is this - The Financial Times - Watch the video. We rate it a cringe factor of 10/10.

If you attended our 2019 housing conference, you will remember her explaining exactly how money laundering in Canadian real estate works.

Head of Deutsche Bank’s DWS steps down after 'greenwashing' raids - Reuters "On Tuesday, German prosecutors said that 'sufficient factual evidence has emerged' to show that ESG factors were taken into account in a minority of investments 'but were not taken into account at all in a large number of investments', contrary to statements in DWS fund sales prospectuses.

Have a great weekend,

Scott Adams is the VP of Communications

FREE — Sign Up for the Veritas News and Insights Newsletter